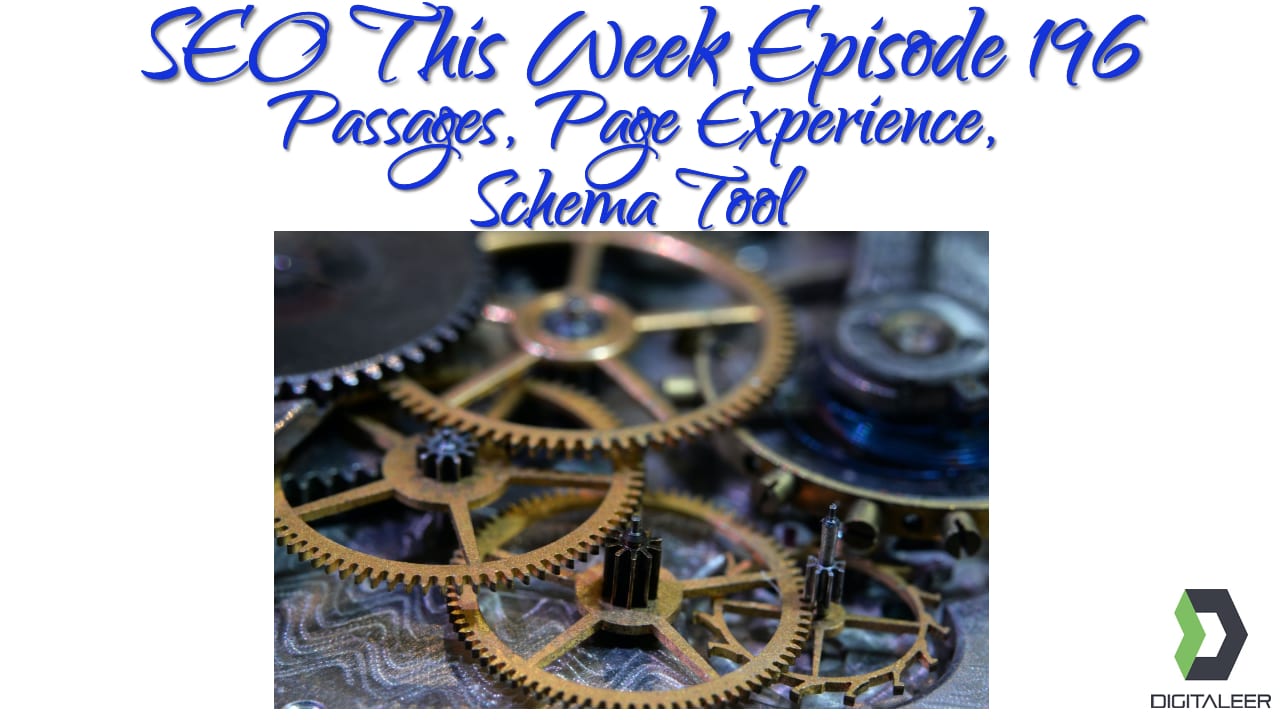 Welcome to Episode 196 of SEO This Week!

I've held back with a lot of caution when talking to clients about the importance of the Core Web Vitals metrics, in particular because they change depending on which system you're using to test for them.

If you're running the program at home in Phoenix, I could get a completely different result in Yuma, because my internet connection and data center may be different.

So the idea that Google will be using the measures for page speed optimization is a little overexaggerated in my opinion.

They want to help drive the web to improve so they dangle "ranking factors" in front of SEO's and marketers that initially show some ranking boost.  But once everyone is on board, its now the standard, and no ranking boosts are attained.

When doing page speed work, we see that all the time.

Working on a very slow site, we see a ranking boost.

But getting a site loading in 2 seconds when it used to load in 3.5 seconds, doesn't make a difference ranking wise.

In this article Kevin Indig talks about some ad blocks that may cause you issues during the upcoming update.

In particular, they are going to let you have a "page experience" badge.

Don't worry, it will be temporary, doesn't mean anything if everyone has one.

So the passage ranking/indexing is live and in the search results.

But what changes has that created?

Well, from a user interface perspective, the search results didn't change that much, if at all.

Time will tell how Google is using passage rankings and creating jump links to specific passages in a page, but for right now if you have a passage on something a user is looking for, your URL will show in the rankings like normal.

How To Make Sense of SEO A/B Test Results

This week I bring you another perspective on how to take those tests and decide what you want to implement across your site based on a SWOT analysis type approach to decision making.

This is a split test looking at CTR variations from different schema implementations.

In short, they tested if having the price in your schema, thus in a rich snippet, if it helped with traffic.

In this case, more isn't better.

Have you ever played Yahtzee?

If not, it’s a dice game and the idea is to get combiniations with a roll of the dice in order to fill up your points card and score more points then you oponnent.

Well, I'm pretty sure this article was written with that in mind.

Its supposed to be a case study, but from the very first paragraph, its nothing more than a rambling of thoughts thrown together to tell a story.

But the way it was done, its more like a Rorschach painting, to get you to see what you want to see.

There is value in it, however, by breaking down the individual sections and examing the concepts the author is at least trying to explain.

Personally, I think its written to show how smart he is without providing any real substance at all, but that's just me.

Maybe you can gleam something out of it I otherwise missed, after reading it four times.

PROUD TO BE GOOGLE BADGED PARTNERS

There are a lot of agencies claiming to be Badged Google Partners. In order to get that status, your agency has to pass the certification tests AND spend $10,000 a month for three months consistently. Only then will Google’s script allow your Google Partners badge show on your website. Go ahead and click the image and take a look at our certifications.